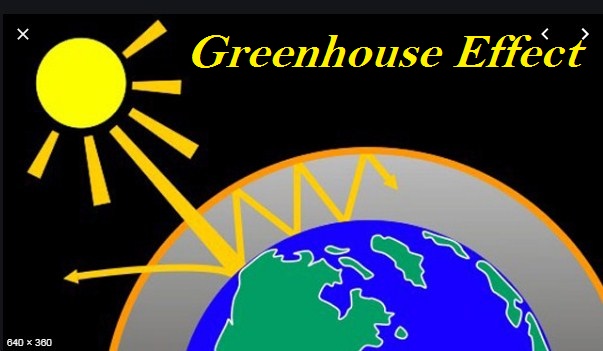 greenhouse effect In cold Countries, a few crops are cultivated in glass-made sheds commonly known as Greenhouses.the sun’s heat enters these houses but gets cultivated and can not get out. thus the greenhouse stays warm and so the selected crops grow well.in other words, an excessive amount of carbon dioxide in the atmosphere obstructs the returning of heat.

What factors are responsible for the Greenhouse effect?

It rather absorbs heat, causing global warming. Clear, carbon dioxide acts as the glass made houses.so the phenomenon is called the greenhouse effect which is caused by unwise human activities. Trees are being cut down and fossil fuels are being burnt indiscriminately all over the world.all these activists are resulting in continuous rise in temperature of the atmosphere (known as global warming).

Drought, untimely and sequences of global warming that are collectively called climate change. True, normal climatic pattern is getting more and more abnormal due to global warming year after year. as tidal surge inundates coastal areas, saline sea-water enters those areas causing severe salinity of soil this phenomenon obstructs usual cultivation. In case global warming continues, the ice of both north and south poles will melt and the sea-level will rise.

What would you suggest for escaping those consequences?

no wonder, the low-lying areas of the world including the Maldives and the coastal areas of Bangladesh will get lost in the seas for ever.there will be severe scarcity of food all over the world and millions of poor people will fall victim to hunger and homelessness. Countries of the world need to take proper steps in no time with a view to escaping all these catastrophic outcomes of global warming. The major ways for saving Mankind are massive afforestation and massive use of renewable sources of Energy solar radiation. We should stop cutting down trees and using trees and using nou-renewable sources of Energy etc.